Growth in Thai Overseas Investment: A Look at the Numbers

A Surge in Thai Overseas Investment

After the slowdown of Thai overseas investments, a result of the Asian Financial Crisis in 1997, Thai foreign direct investment outflows increased continuously from 2005-2010, rising from $551 million in 2005 to $8.1 billion in 2010. This represented an impressive 15-fold increase in Thai FDI outflows; ASEAN member nations and China remained the major recipients of Thai investments, while Europe and the U.S. experienced a slower increase.

With this momentum established, Thailand became a country with net capital outflows in 2011-2012 and reached the highest outward flows of $14.3 billion in 2012, according to data from the Bank of Thailand. However, these flows dropped dramatically in 2013-2015 due to low economic growth and the volatile political situation. Some Thai companies decided to postpone or cancel their overseas investment plan - in order to cope with their business situation at home. The tense economic and political situation has since eased, and overseas investment recovered, reaching $13.4 billion in 2016. (According to UNCTAD calculations, 2016 was Thailand’s peak year for FDI outflows.)

This upward trend of Thai investment abroad was motivated by five main factors:

Thai companies invested overseas both in the form of greenfield investments and mergers and acquisitions (M&As). During 2014-2016, ASEAN countries accounted for 27% of the total investment from Thailand, followed by Japan (12%) and China (4%). The food product manufacturing sector was the largest source of overseas investment followed by computers, electronics, optical, and electrical equipment. Other major sectors engaging in FDI include financial and insurance services, mining and quarrying, real estate, and wholesale and retail trade.

Implications for the Thai Economy

There are both associated risks and upsides of this economic activity. So, what are the effects of this huge increase in overseas investment on the Thai economy?

The outflows inevitably impact the country’s underlying economic structure. For labor- intensive industries such as textiles and garments, gems and jewelry, electronics, and leather products, relocating production units to countries with lower labor costs reduces production in Thailand and may affect employment and exports. Workers in these industries are at risk of being unemployed and having to relocate to other companies or other industries. However, on the other side of the coin, there is also considerable expansionary potential for industries in which the overseas investment complements the production unit in Thailand.

On the positive side, outward investment is a channel for Thai companies to increase their competitiveness and act as an engine of growth for the Thai economy. Being competitive in the globalized market is crucially important for companies operating in the current economy. Internationalization through overseas investment is an opportunity for Thai companies to access new markets and sources of raw materials, relocate or extend their production units to more efficient locations, and obtain advanced technology, know-how, and networks. 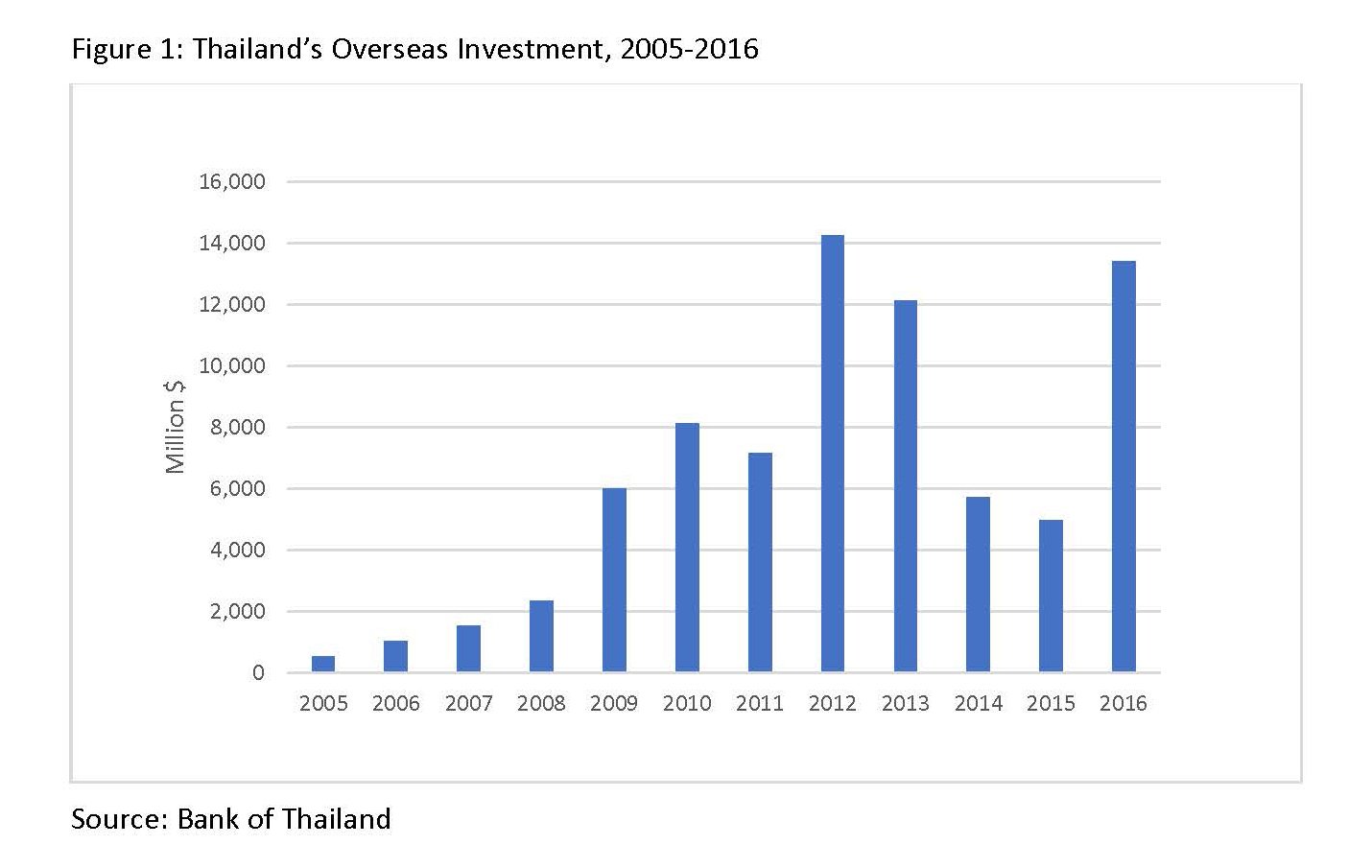 For Thailand, a developing country in the upper-middle income level, it is important for the economy to move up the development ladder and become a high-income country. Connecting to the world through investment abroad provides a way to become an innovation-based economy. Those companies that obtain knowledge and technology through investing abroad can help hasten knowledge transfer to companies that only operate in Thailand. In addition, their overseas investment can help fill in the gaps in their skills and knowledge base, or improve their production technology, which is crucial for further economic development in Thailand.

Who are the companies that engage in foreign direct investment from Thailand and what are their characteristics?

Most Thai companies investing abroad are large private sector enterprises. They tend to have high capital reserves, advanced technology, and know-how, which they use to further leverage their advantaged position. The majority of the investors come from manufacturing, financial and insurance services, mining and quarrying, real estate, and wholesale and retail trade.

The major manufacturers investing abroad include those from the food product, beverage, electrical equipment, and machinery and equipment industries which are part of the Thai economy’s backbone. These companies have a long operating history, during which they accumulated both capital and know-how. Financial and insurance services have the advantage of large capital reserves, and they seek to follow their customers in expanding their businesses to international markets. Accessing resource-rich locations is a key driver for Thai companies engaged in mining and quarrying, and their high capital reserves facilitate their expansion abroad.

With the development of the digital economy and information technology, opportunities for small and medium-sized enterprises (SMEs) to invest abroad have increased dramatically. A new wave of Thai SMEs are participating in global investment, due to the lower cost of investing abroad and the emergence of a new type of company: global-born firms. Global-born firms seek to attain significant competitive advantage from expanding their output and sales in multiple countries. These companies start their businesses with a borderless view of markets and develop strategies for investing overseas at inception.

Many e-commerce and digital companies invest overseas because they want to utilize the benefits of being global- or regional-born firms. SMEs in IT, marketing and advertising, hospitality and recreation, consulting services, logistics, and the digital economy are the most likely to internationalize through overseas investment, but the trend is also seen in the manufacturing sector and companies that participate in regional networks or the GVC. Moreover, the Thai government has introduced the “Thailand 4.0 Development Plan” with the goal of making innovative and value-based industries the country’s new engine of growth. This policy has driven Thai companies to transform themselves into smart enterprises producing high value- added goods and services.

Companies attempting to align with the “Thailand 4.0 Development Plan” have increasingly more sophisticated business practices and demand more sophisticated competitive advantages. These companies prioritize R&D and the creation of innovative or high-value added goods and services, especially those in the ten so-called S-Curve industries (named for their potential to create rapid growth), which includes next-generation automotive, smart electronics, affluent medical and wellness tourism, agriculture and biotechnology, food for the future, robotics, aviation and logistics, biofuels and biochemicals, medical hubs, and digital enterprises. Investing overseas is one of the most accessible and rapid choices when it comes to acquiring new technology and innovative business practices.

To further develop the Thai economy into a high-income country with innovative and value-based industries that align with Thailand 4.0, Thai companies need to seek new business practices and competitive advantages. One way to access and utilize these advantages is through overseas investment. At this stage of economic development, many Thai companies are looking for opportunities to participate in the GVC, cooperate with foreign companies to develop new technology and know-how, and become business partners with companies from many countries including the U.S., EU member nations, Japan, and South Korea. Many window of business opportunity are now open for cooperation between Thai companies and their partners, and they can develop together.

Sineenat Sermcheep, Ph.D, is an Associate Dean on the Faculty of Economics at Chulalongkorn University and co-editor of “Outward Foreign Direct Investment in ASEAN” (ISEAS-Yusof Ishak Institute, 2017).

She can be contacted at:  Sineenat.S@chula.ac.th