Outward Bound: How Thai Companies are Flipping the Script and Investing Abroad at Record Rates

From the 1950s up to the turn of the millennium, it used to be that Thailand’s various governments would visit their counterparts in the United States with caps in hand requesting this and that – from development aid and equipment donation to investment funds. This is no longer the case,” wrote Pavida Pananond in the Bangkok Post on October 5. Pananond, an Associate Professor of International Business at Thammasat University’s Business School, has been astutely studying the relatively new phenomenon – and the quickly rising tide – of Thai companies investing abroad.

What’s more, Thailand was the fastest-growing source of FDI in the United States in 2016, pouring $2.08 billion into America. According to the U.S. Bureau of Economic Analysis, majority Thai-owned firms supported as many as 2,499 American jobs and invested $5 million in U.S.- based research and development. Admittedly that’s a small fraction of the total $3.7 trillion that flowed into the U.S., but it marks a sea change here in Thailand. 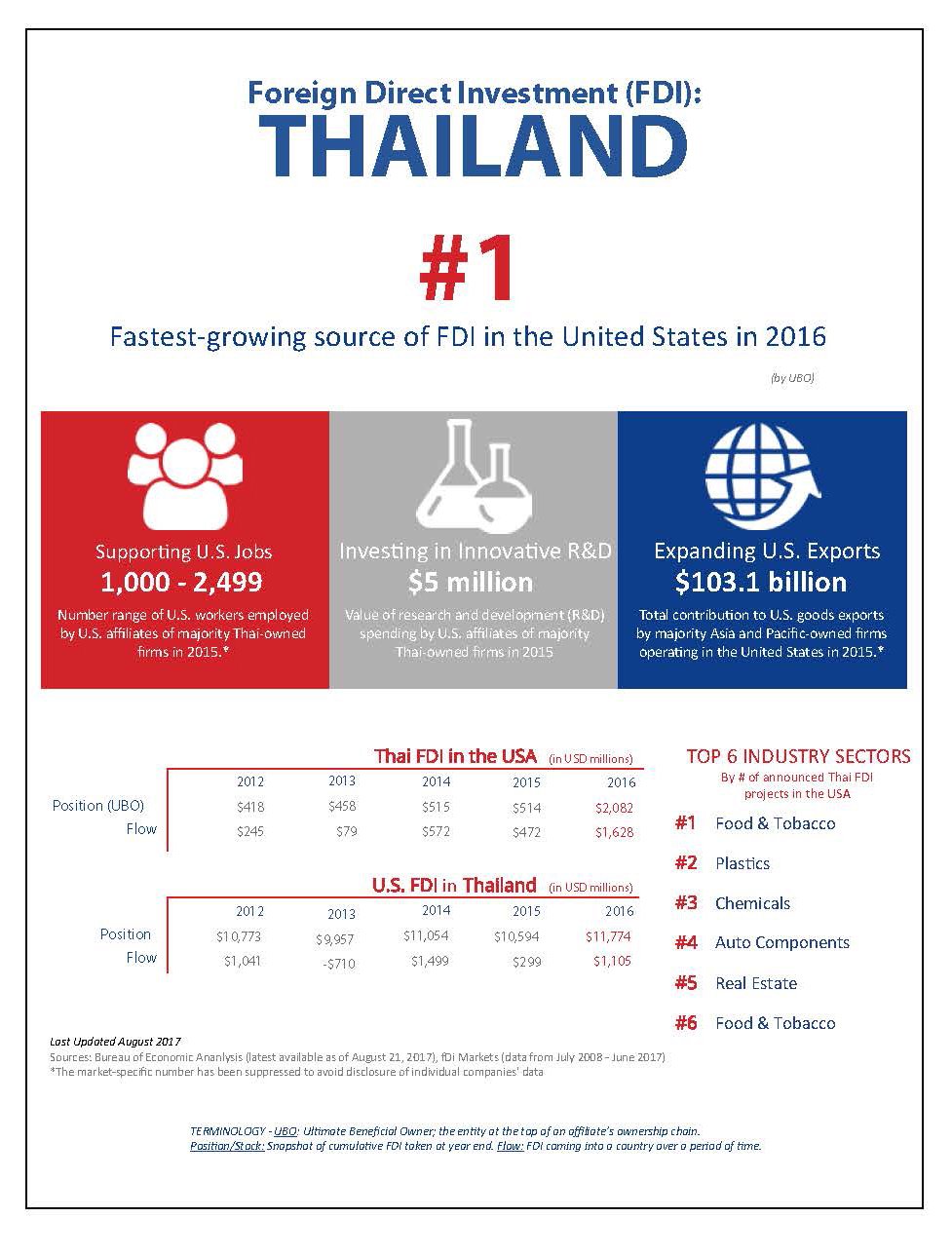 The numbers all point to a rapidly internationalizing slate of Thai-owned businesses, and American companies should take note. No longer are Thaiowned firms waiting for the world to come to them—instead, these increasingly sophisticated entities now have the ability to develop the resources they need, whether it be talent, technology, or distribution channels. That’s why this issue of T-AB is taking a closer look at the changing business environment and how companies are changing along with it.

The trend of Thai companies turning outward can be traced back to the Asian financial crisis in 1997-98; prior to the crash, Thailand’s economy was growing at double-digit rates and companies that invested overseas were a rare breed. Postcrisis, domestic growth proved elusive, prompting Thai companies to look elsewhere for investment opportunities. According to Pananond’s research and numbers from the United Nations Conference on Trade and Development (UNCTAD), Thai FDI outflows broke the $1 billion mark in 2007, surged sharply in 2012, and reached a record high of $13 billion in 2016. 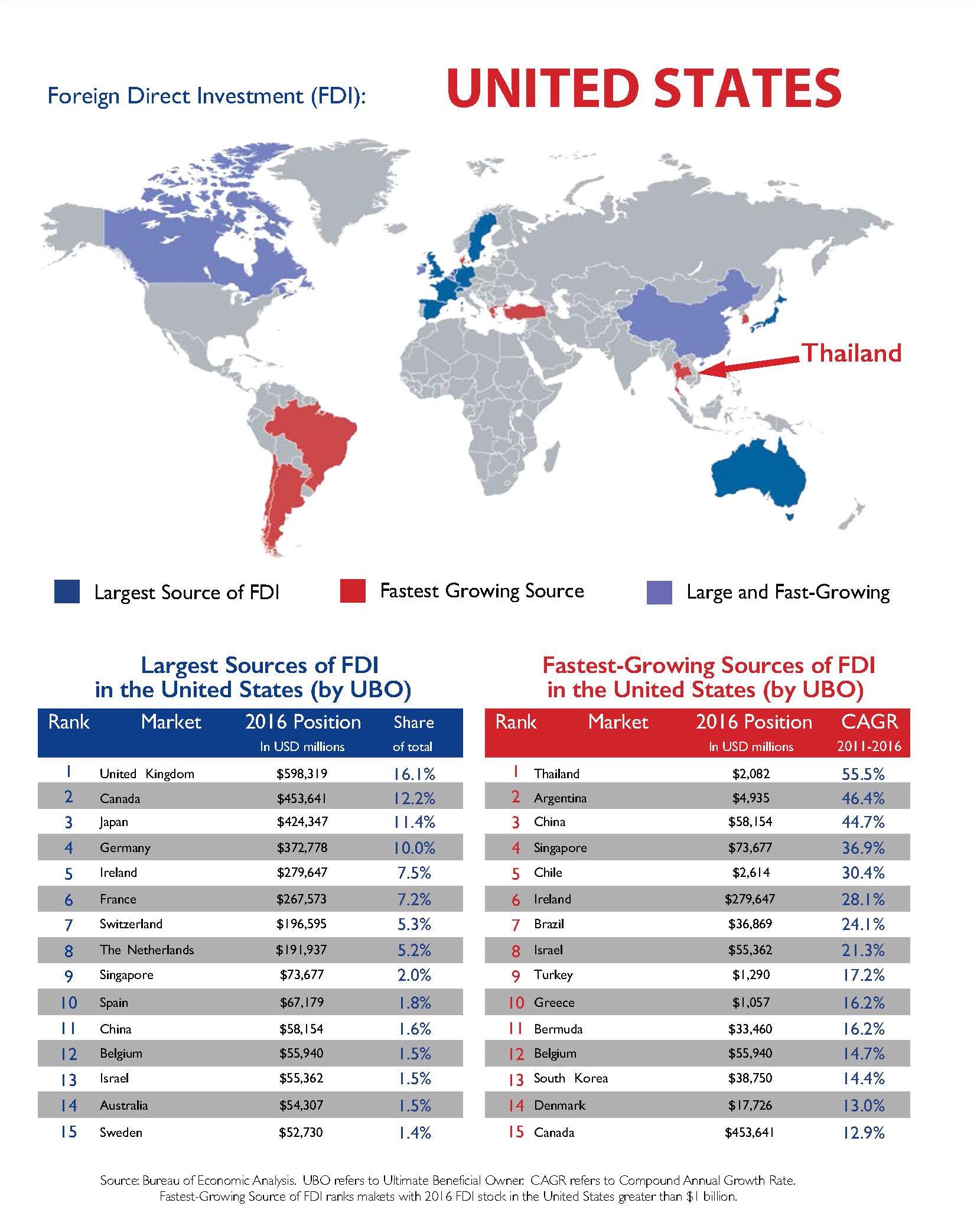 And it’s not just one sector that’s driving the trend—agricultural concerns, retail developers, financial firms, plastics and chemical companies, hoteliers, rubber producers, and food and tobacco firms are all making major investments outside the Kingdom. It shows no sign of slowing down, either, despite signals that indicate more stable domestic growth. While overseas investments from Thai firms have in the past focused on manufacturing, companies are now increasingly going out in search of more advanced technology. This is likely to increase as focus remains on Thailand 4.0.

Thai Union, which was already the world’s biggest producer of canned tuna bought a 49% stake in Red Lobster for $575 million at the end of 2016. And during Prime Minister Prayut Chan-o-cha’s state visit to the White House, plans were announced for the state-owned oil and gas company PTT to invest $6 billion in an ethane processing plant. Smaller deals abound, too, like Sansiri’s $58 million stake in hip American boutique hotel brand The Standard.

This helps explain how the U.S. has become the largest single host country of Thai investment in the developed world, according to Pananond’s research. “In value, Thai investment stock in the U.S. grew 10 times from a mere $500 million in 2006 to $5.2 billion in 2016, while inward FDI stock from the U.S. to Thailand did not even double, expanding from around U.S. $9 billion to just $15 billion during the same period,” she wrote in the Bangkok Post.

Add to this the fact that Thailand has a $19 billion trade surplus with the U.S.— the 11th largest in the world—and the country looks and feels like a growing powerhouse. 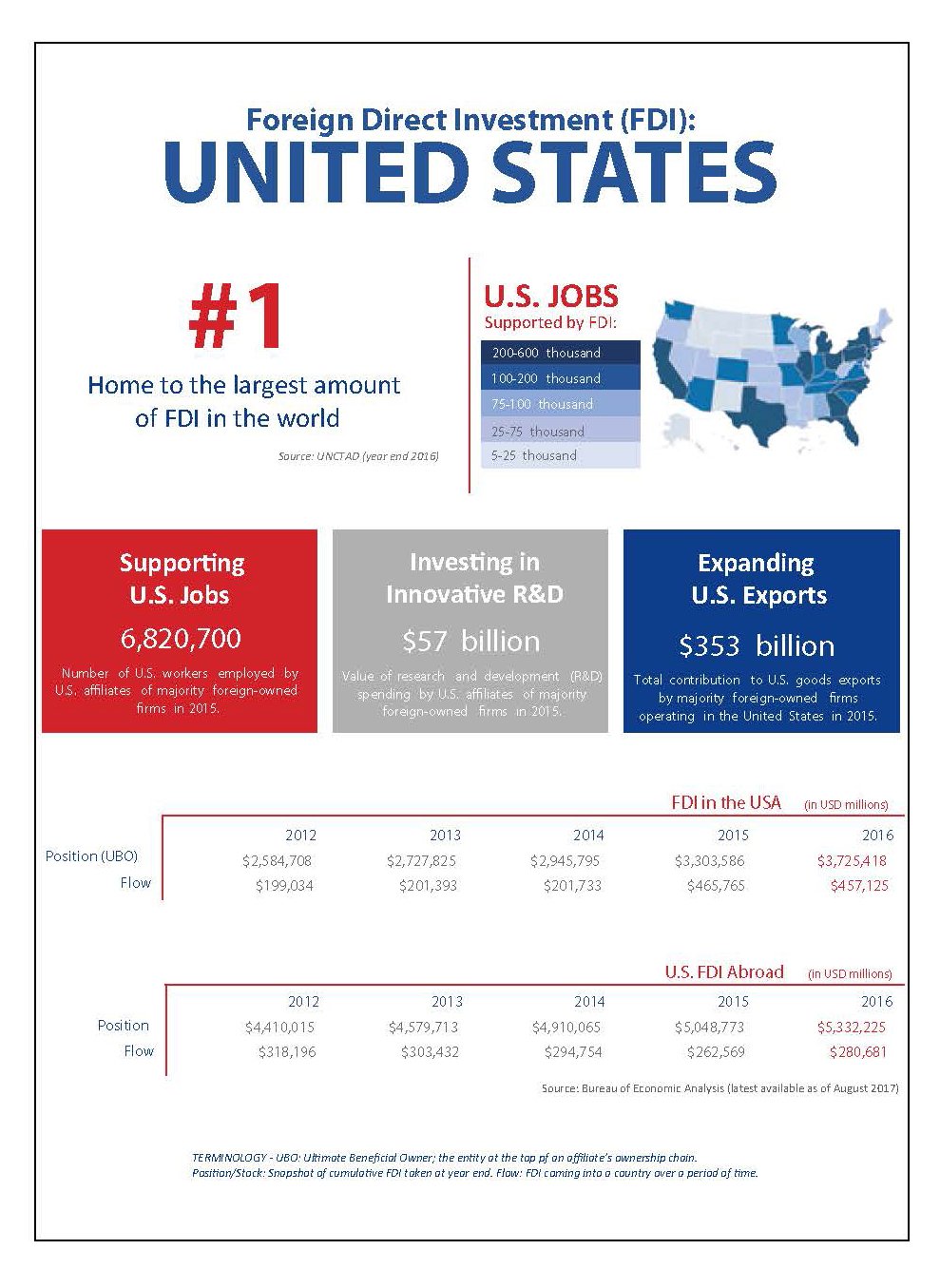 That said, the real money is flowing much closer to home. The largest chunk of Thai outward FDI goes to concerns within the ten member states of the Association of South-East Asian Nations (ASEAN), which accounts for a full 30 percent of Thai investment abroad. Activity is concentrated in Singapore along with some of Thailand’s fastest-growing export markets, namely Laos, Myanmar and Vietnam.

Some big deals have been made in the region as well, including Central Group’s $1.1 billion purchase of Vietnamese supermarket chain Big C, along with the company’s announced construction of a large-scale shopping mall in Phnom Penh. There’s also Siam Cement Group’s $440 million acquisition of Vietnam Construction Materials JSC, and multiple Thai banks – Kasikornbank, Bangkok Bank, Krungthai Bank, and Siam Commercial Bank – have expanded their operations into Cambodia. These moves within ASEAN are indicative of the big ambitions of Thai firms, which are angling to transform themselves from domestic players into regional and even global leaders.