2017 was an interesting, fascinating, and unorthodox year for politics and business in the United States. The year started off with a transition of the executive branch of government, which symbolized the end of the Obama administration’s tenure and the beginning of the Trump administration. The Trump administration’s somewhat controversial method of governing provided few political victories for the new President, even with a Republican controlled Congress. However, that all changed towards the end of 2017 with the passage of the Tax Cuts and Jobs Act (TCJA), which was signed into law by the President on December 22, 2017 and went into effect on January 1, 2018. It is the largest overhaul of the federal income tax system since the Reagan administration reformed the income tax code back in 1986.

The majority of the changes from TCJA will alter the way U.S. corporations are subject to income tax, but several adjustments will have ramifications on individual U.S. taxpayers for years to come. The change in tax brackets will probably have the biggest impact on individual taxpayers. The extent of the impact will depend upon the method in which the taxpayer earns their income and their filing status. 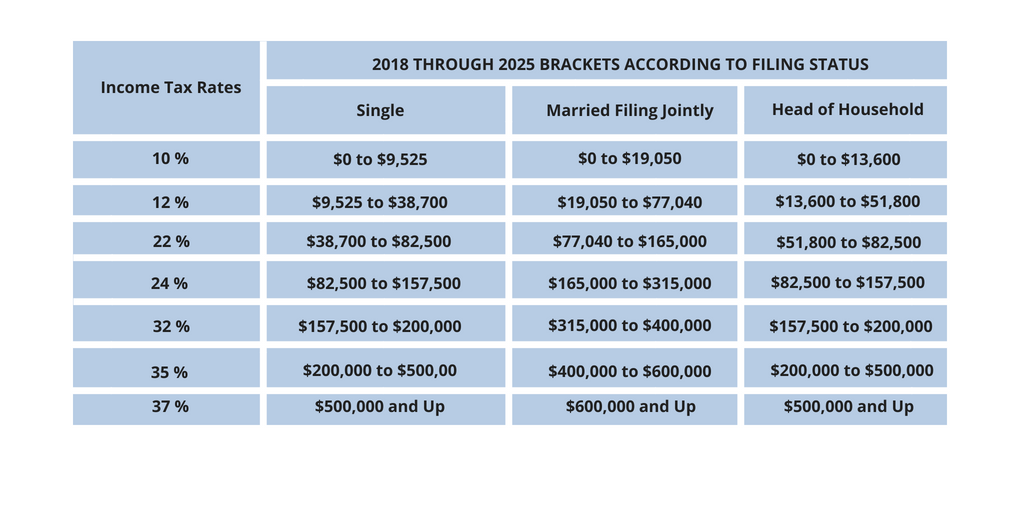 The income tax rates for individuals preparing to file their 2017 tax returns are listed below, according to filing status

It is instructive to compare 2017 rates to the new 2018 tax rates on the following page, which took effect on January 1. Keep in mind that if no other adjustments are made to the U.S. tax code and the TCJA remains as written, come 2026 the income tax rates for individuals will revert back to 2017 levels.

It’s impossible to generalize how these changes to the tax brackets will affect individual taxpayers, but we will create some hypothetical examples in future issues of T-AB. Any U.S.expats currently working in Thailand who are compensated in U.S. dollars and are subject to Federal income tax withholding should consider adjusting their withholding to the current income tax rates if they haven’t already.

The increase in the standard deduction will most likely have the net effect of discouraging many taxpayers from itemizing their deductions as they previously did. Below are major deductions that have either been repealed or significantly adjusted:

Additionally, the exemption and phase-out amount of the Alternative Minimum Tax was also adjusted.

Although few U.S. citizens living in Thailand are affected by this, it’s interesting to note that as of 2019, the TCJA permanently repeals the IRS administered penalty for individuals who do not acquire health insurance, yet ironically the 3.8% Net Investment Income Tax that was implemented during the Obama administration to help subsidize the Affordable Care Act remains. Taxpayers with investment income and who are subject to this 3.8% surtax might want to question the motives of the politicians who rushed the TCJA through. If the surtax stays, yet the public health insurance program that the surtax was supposed to fund is slowly being eliminated, where is the money being paid on this investment income surtax going?

With all the confusion and uncertainty regarding the TCJA, there is some good news for U.S. Citizens residing in Thailand. Even though it doesn’t address the citizenship-based taxation system that U.S. Citizens residing and working overseas are subject to, the Foreign Earned Income and Housing Exclusion will be retained, which in many cases can make the income that a U.S. citizen earns overseas untaxable, even though they may still have a filing obligation. Additionally, the Foreign Tax Credit that prevents double taxation on income earned and taxes paid in countries that have a tax treaty with the U.S. will also be retained. Below is a chart summarizing some of the benefits and costs of the passage of the TCJA and how they affect U.S. citizens living and working in Thailand.

For U.S. taxpayers who plan ahead and make quarterly tax payments to the Internal Revenue Service, the first quarterly payment for 2018 is due on April 16. This payment should reflect the 2018 income tax rates which were reduced as a result of this legislation.

In conclusion, the TCJA is somewhat vague and ambiguous, and the effects of its passage on anyone doing business in or with the U.S. remains to be seen. In fact, U.S. tax practitioners worldwide are scratching their heads wondering how this new law will be applied to their clients. Throughout the year, members of AMCHAM and readers of T-AB can rest assured that we will continue to study and analyze this new tax law, and articulate it in a way that ensures members can conduct proper tax planning accordingly. 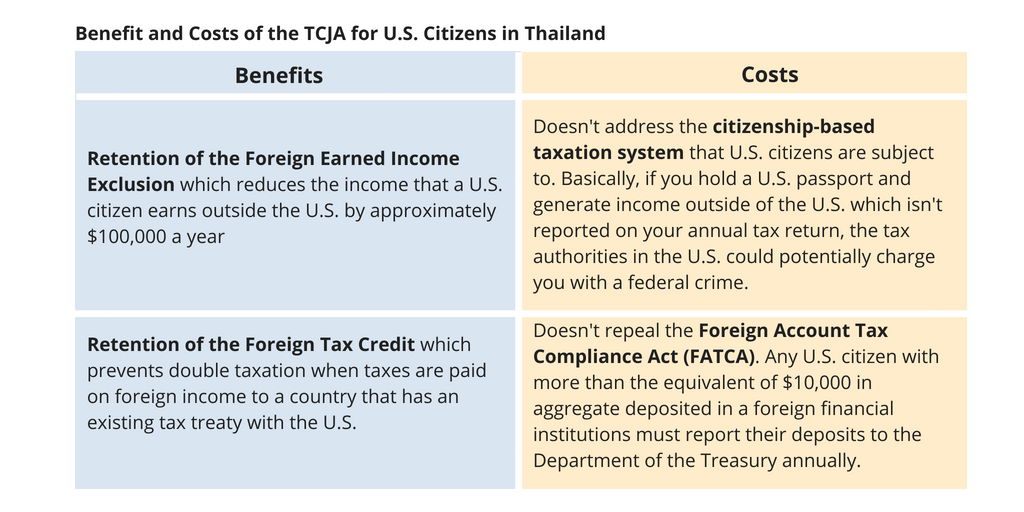 Matthew Stevens, EA, is the Director of U.S. Tax at U.S. Global Tax. He can be

Promoting shared economic prosperity between Thailand and America since 1956.

Corporate Membership is available to companies registered in Thailand. Corporate Members receive a listing in our Member Directory, the right to nominate up to 10 representatives, and 8 vouchers that may be used at our Monthly Luncheons (a value of THB 8,000). Members are entitled to one vote.